This is your opportunity to show off how creative you can be, as well as those quality workmanship talents to peers in the industry and potential customers alike.

Votes will be cast by ballot for the:

All voting will be done during the 2007 Slipcover Summit in Waltham, Ma. June 27-29.
Entries must be post marked no later than June 1, 2007 to be eligible for the contest.

2nd Prize in each category will receive:
1 yrs Directory listing and Slipcover Press (full Membership with the Slipcover Network $45 value)
Gift Certificate Value from Slipcover America ($45 value) Choose from Books, DVDs or Supplies in relations to the Sewing Fabrication Industry
Photo of award winning slipcover to be used in all advertising regarding the Slipcover Summit and Slipcover Network, plus choice placement on the 2008 Slipcover Calendar.

3rd Prize in each category will receive:
Gift Certificate from Slipcover America ($45 value) Choose from Books, DVDs or Supplies.
Photo of award winning slipcover to be used in all advertising regarding the Slipcover Summit and Slipcover Network, plus placement on the 2008 Slipcover Calendar.

Slipcover Design Entry must submit:
1) Quality 8x10 photos shot from 4 sides,
2) Plus high lighting special design features of the slipcover in a close up photo.
3) Brief description of how any special design features were accomplished should be included in the entry.
Photo will only be returned if a self addressed envelop is included with submission.

Slipcover Workmanship Entry must submit:
1) Quality 8x10 photo of the slipcover on the furniture shot from 2 directions,
2) A brief description of the slipcover,
3) And the actual slipcover to be judged for workmanship.
Photo and slipcover will be returned with the correct return postage included.

having an open house to exhibit these machine at my house Feb 3. RSVP slipcoverlady@juno.com McLean Va 22101 if you map quest, to give you rough idea.

How is everyone else doing out there????

Karen
Posted by K from WA at 1:07 PM 5 comments: Links to this post

Over 11,000 Americans Tell EPA to Clean Up Toxic Dry Cleaners


Washington, D.C. -- Over 11,000 Americans have petitioned EPA to adopt stronger protections from toxic chemicals released by dry cleaners nationwide. Environmental groups, pollution experts and dry cleaners themselves agree that a phase out of the harmful chemical perchloroethylene (PCE, or perc), a solvent used primarily by the dry cleaning industry, is feasible and vital to reducing serious health and environmental threats.

The wave of comments were lodged to protest EPA's proposed decision to leave millions of Americans at risk from toxic perc emissions. More than 27,000 dry cleaners across the country still use old machines that clean clothes with PCE. Although some cleaners have successfully switched to non-toxic alternatives like wet cleaning, EPA in a proposed rule issued last December refused to consider a phase out of PCE machines. The agency has classified PCE as a probable cancer-causing chemical that has been linked to liver, kidney and central nervous system damage. Over half of federally identified Superfund sites are contaminated with PCE.

"PCE can be phased out and replaced with machines that work as effectively and do not pose the serious health and environmental threat," said Jane Williams, a national leader and air toxics expert for the Sierra Club. "EPA is ignoring these possibilities and the evidence that shows alternatives exist and actually work. There are so many dry cleaners in so many towns that EPA should be making a phase out of PCE a top priority."

Although EPA has acknowledged that the health risks from PCE dry cleaners are extremely high, the agency's recently proposed regulations do almost nothing to address these risks. In particular, EPA failed even to consider a phase out of PCE use that would reduce the health risks to zero. Remarkably, EPA reached this conclusion even after acknowledging that PCE-free alternatives would be cost effective. During the rulemaking process, EPA met repeatedly with representatives of the companies that sell PCE, but made no effort to contact affected communities to learn their concerns.

In California, the South Coast Air Quality Management District approved a phase out in 2003 of PCE that will eliminate PCE dry cleaners in the southern California region by 2020. As old machines break down and need replacing, dry cleaners are purchasing newer, cleaner machines running on less toxic solvents. EPA does not explain anywhere in its rule why Americans in the rest of the country should be deprived of the protections that such a ban will provide.

Peter Sinsheimer, director of the Pollution Prevention Center for the Urban and Environmental Policy Institute at Occidental College said, "Our research has shown that perc dry cleaners can successfully switch to non-toxic technologies."

Some dry cleaners have successfully switched to non-PCE machines. Frank Shaghafi, the owner of Blue Sky Cleaners in California, now operates only wet cleaning machines and machines that use captured carbon dioxide. "My employees feel better, our clothes are coming out just as clean and we know that we are not putting this toxic chemical into the environment," Shaghafi said. "We've received interest from other dry cleaners and are receiving clothes from all over the world to clean with these machines. Small businesses such as dry cleaners can protect the environment and can do so without any major economic burdens."

What's the Problem with PERC?

New Types of Dry Cleaning
Posted by K from WA at 7:32 PM No comments: Links to this post 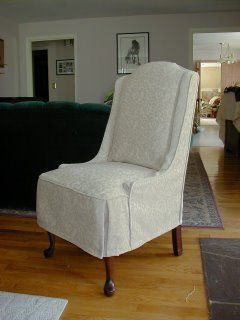 This is the only event of its type in North America
totally devoted to the art and profession of slipcovers for furniture.

Each year the Slipcover Summit is held in a different region
of the country, affording the opportunity of furthering
education to those who have difficulty traveling to one
specific area of the country.

Designers, decorators and those with sewing workrooms have
the opportunity to learn from seven instructors who are actively
involved in slipcovering furniture in their own businesses. All
instructors volunteer to teach at the Summit in a particular
slipcover method, technique or expertise.

Limits are set on the size of each workshop. This give each participant
the opportunity to experience hands-on and to be up close to view the
demonstrations in each workshop.

Scholarship are available to those who have never attended a
Slipcover Summit. If you are interested in an application for a
Scholarship please send email to Angie Knowles at threadneedle@tampabay.rr.com

More information on workshops, instructors, and how to register, visit http://www.slipcoveramerica.com/summit2007.html or call 800-267-4958. A PDF file is available for printing on the website.

Posted by K from WA at 8:03 PM No comments: Links to this post

Sleeping on Stinging Nettles: the Next Bamboo?

The technique for producing fine cloth and sailcloth from stinging nettles has existed for centuries. Heinrich Kranz is reviving the art for the modern age. Encouraged by a customer to pursue the idea, Kranz founded the firm Stoffkontor Kranz AG, and got rights from the University of Hamburg to grow an oversize version of the common weed. The fiber Kranz produces is a legitimate alternative to cotton, with the advantage that is grows like...well, a weed, without the need for pesticides used in the cotton industry--currently accounting for 24% of the global insecticide usage according to WWF.

Kranz is growing the three meter (nine feet) tall nettles on 160 hectares (400 acres) near Luechow, Germany. Plants grow without the use of pesticides and with only occasional application of fertilizer. Each 10 to 15 years, the plants must be replaced. Once per year the nestles are mowed and dried. The fibers within the nettles are separated in Kranz's own mechanical process and then cleaned with a patented bio-process relying on enzymes. The fibers are then woven, also on site, for the production of fabric, bedding, shirts and jeans.

Currently Stoffkontor Kranz occupies 17 employees and has sales of 1.8 million Euro (2.3 million dollars). Kranz's products are now sold through over 1500 shops and over the internet at Nettleworld (German only). His is the only industrial scale production of nettle fabrics.

Kranz is convinced of the potential to compete with cotton. He calculates that when his operations can be expanded to 10,000 hectares, the nettle fabric made in Germany will be cost-competitive with Indian cotton, while offering substantial ecological advantages. A closer review of the webshop at Stoffkontor Kranz reveals that most of the fabrics are nettle/cotton blends, with nettle fibers composing only 5 - 43% of the fabric. One hopes the techniques being used at Kranz lend themselves to fabrics that are majority nettle, and the current low nettle contents reflect marketing strategy rather than technical limitations.

For his efforts and successes, Heinrich Kranz was awarded a special recognition in the Eco-Manager of the Year competition sponsored by WWF's German branch. Congratulations, Herr Kranz, we hope to see your ideas spread widely.

Via ::WWF Eco-manager of the Year Germany (German only)

give away to good home.

100 yards washed, bleached canvas. Has not yet been pressed. Challenging to work with, but sells itself for those who want white utility washable covers.

It is now more than I can do to carry, lift, sew this stuff, gotta save my body for another 20 years sewing.

I'd prefer this didn't wind up in the land fill, it served me well, was well loved by customers. IT's just too hard for me to do now.
Posted by Shirley Hendry Walsh at 8:30 AM 3 comments: Links to this post